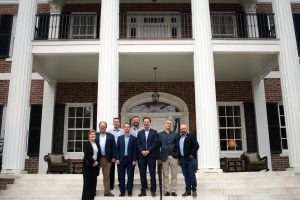 SAVANNAH, GEORGIA U.S.A. – April 1-4, World Trade Center Savannah (WTCSav) in partnership with Georgia Power, welcomed an international business delegation from Ireland for the Savannah Gateway Regional Showcase (SGRS). The event, which coincided with the Savannah Music Festival, served as an opportunity to highlight the economic assets and strategic advantages of the Coastal Georgia region and how it can serve as an ideal gateway into the U.S. market.

Many of the companies were recruited during a Nov. 2018 WTCSav-led trade and business development mission to Wexford, Ireland as part of the TradeBridge program. The case for “Why Savannah?” was presented to almost 50 Irish business leaders and influencers, and they were invited to apply to join the 2019 SGRS delegation.

The TradeBridge program was announced in March 2018 with the overall goal of developing a trade corridor between the Savannah region and Wexford County, Ireland and advancing the long-standing relationship between the areas.

The goals of SGRS are consistent with the mission of TradeBridge — to further develop trade opportunities, increase foreign-direct investment opportunities and help the coastal Georgia regional businesses expand internationally.

By working with our partners, the region was showcased through industry visits, targeted business-matchmaking meetings and networking opportunities with a goal to further develop trade opportunities, increase foreign-direct investment and help our regional businesses with trade channels in and through Ireland.

The group visited the Port of Savannah, home to the largest single-terminal container facility of its kind in North America. The Port of Savannah is the fourth busiest container handling facilities in the United States, encompassing more than 1,200 acres and moving millions of tons of containerized cargo annually.

Additionally, members of the group visited Georgia Southern University, the fourth largest public university in Georgia, as well as the internationally renowned university for creative careers, Savannah College of Art and Design. The week concluded with dinner at the former estate of Henry Ford, the founder of the Ford Motor Company.

Since identifying Ireland, one of the state’s largest trade partners, as a target country, World Trade Center Savannah, along with partners throughout the region, have been working to expand these opportunities with and for Coastal Georgia.