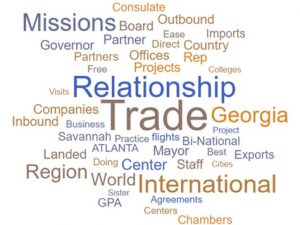 The countries selected hold the most potential based on existing assets, industries, connections, relationships and investment. World Trade Center Savannah’s board and staff examined and evaluated dozens of criteria that directly affect international commerce throughout the region.

“As a part of World Trade Center Savannah’s strategic plan to elevate Coastal Georgia on the global business stage, the organization develops the list of countries for proactive engagement,” said WTCSav Vice President Brynn Grant. “In 2012, this exercise began as a project to understand how the Coastal Georgia region is connected to the rest of the world and how those connections evolve. The effort resulted in a target country process that helps the team advance the mission of WTCSav through data-driven decision making and focused efforts.”

Some highlights outlined below on the target countries:

The research conducted by WTCSav is a central and ongoing process at the core of the organization, as it shapes the direction for educational programs, trade services and outbound trade missions. The research will also be of value to WTCSav Economic Development Authority and Business Partners throughout the region as WTCSav works with them to evaluate this data in addition to supplementary figures based on their target industries and markets.  For more information on the 2018 target countries, contact WTCSav Manager of Trade and Research, Jessie Bynum.