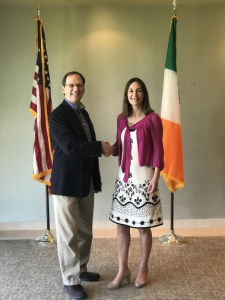 A new pilot program connecting the Savannah area and Ireland for international trade and investment is up and running.

Called TradeBridge, the program was announced in mid-March by its partners, the World Trade Center Savannah, the Savannah Economic Development Authority and the county of Wexford, Ireland.

As part of the program both Savannah and the county of Wexford each hired a person devoted to business and trade development.

Alison Stone Thompson of Wexford has been hired for Wexford’s side of the partnership. Savannah’s Trey Rossiter is the development advisor located here.

Thompson has been in Savannah this week, along with a number of Wexford officials, including the chairman of the county council, and the mayor.

“This is the beginning of the culmination of a lot of action and a lot of activity,” Trip Tollison, president and CEO of SEDA said of the hirings. “We are not only working to create a fantastic, superb, wonderful alliance with Wexford, we’re putting our money where our mouth is and we’ve hired two great people.”

Savannah area companies and those in Wexford who want to do business internationally, are now a quick call or email away from starting the process.

“To have someone on the ground in Wexford (or Savannah) who knows the players and knows how to get things done is extraordinary,” Tollison said. “We’ve never done anything like this before.”

TradeBridge is designed for established businesses big and small.

Rossiter said that 60 percent of companies in Georgia that are now exporting have fewer than 100 employees.

“And of those, the majority have fewer than 20,” Rossiter said, “Size doesn’t matter.”

What does matter is the company be established — and ambitious.

“It’s ambition, the product fit and getting the right market,” Rossiter said. “We bring tools to the table the companies otherwise might not have access to.”

Thompson said TradeBridge is a great way for a business to take advantage of expertise.

“TradeBridge does a very good job here, and in Ireland, Thompson said. “It is a low-risk strategy if you like, and a low-cost way to dip your toes into foreign markets to see if works for you. You can test the market quickly and easily and you have somebody on the ground who can actually match mate your company — and cut out a lot of the hassle in between.”

TradeBridge is not only about Savannah and Wexford, Rossiter and Thompson said.

“This is a clear stepping stone into the European market as a whole,” Rossiter said. “The Irish companies can consider Savannah a foothold, establishing a presence in the U.S. market,” Rossiter said.

“We will soon be the only English speaking member of the European Union,” Thompson said.

The TradeBridge and SEDA crew are at the ready, and encourage area businesses to reach out.

“You’ve got a free service right here at their disposal,” Tollison said.

TradeBridge is also the continuation of an almost two-hundred year relationship between Savannah and Wexford.

Savannah became home to many Irish who emigrated in the 1850s. Wexford was the only place in Ireland at one time where one could travel directly to Savannah.

By 1861, according to Wexford Savannah Axis, 14 percent of Savannah’s population was Irish-born, with a majority being from Wexford.

Wexford-Savannah Axis is a scholarly endeavor to understand the relationship between Wexford and Savannah. Georgia Southern University’s Honors Program and Center for Irish Research and Teaching have sponsored students to participate in summer research programs to investigate the Wexford-Savannah connections since 2014.

The founding partners in the Wexford-Savannah Axis research consortium are Georgia Southern University, the Savannah-based Georgia Historical Society, Waterford Institute of Technology, a university in southeastern Ireland; and the John F. Kennedy Trust, a heritage foundation that operates the Dunbrody Emigrant Experience Center in the historic County Wexford port of New Ross.

Prior to the mass immigration years, Savannah exported Georgia timber, rice and barrel staves to Ireland. Ships from Wexford traveled loaded with ballast to Savannah, returning to Wexford with lengths of oak and pine.

The ballast stones from Wexford and other places around the world were used to “pave” River Street.